This post on Notre Dame de Lorette is part of a series on the Great War sites of the Western Front in France and Belgium. 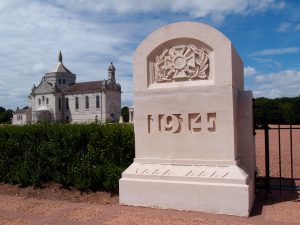 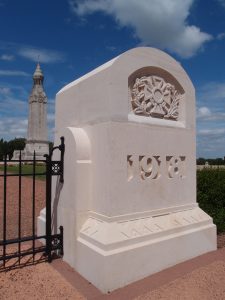 In the flat plains of the Artois region, Ablain St-Nazaire lies on a 165-metre-high ridge. With high ground scarce around the Douai plain, this ridge and Vimy Ridge nearby were key targets for both sides. The Germans held the ridge early in the war. While they failed to capture Arras, by holding this position they were able to survey the main routes around Lens. The Allies found it somewhat inconvenient to have the enemy taking pot shots from above and a military solution was inevitable.

The Battles of Artois are overshadowed in the early history of the war by the catastrophic losses at Verdun in 1916. However, these battles of 1914 and 1915 were as just as destructive to the French armies. Accordingly, at Notre Dame de Lorette lie the unidentified remains of many soldiers who fought in this campaign and are known only to belong to France.

As the largest French military cemetery, it is the focus of many commemorations and national pride. Crosses mark the majority of graves, while the Muslim soldiers of the First Moroccan Division lie facing east below headstones.

Being foreigners in France, it felt appropriate to pause here on our tour of the many Commonwealth cemeteries. While those are affecting memorials to those who died far from home, it cannot be lost on those who travel in the region that these were events of monumental significance happening to real towns with civilian populations. 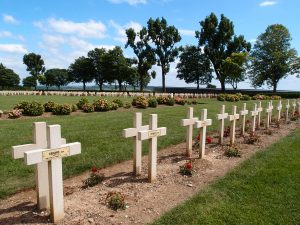 Today, you can still see the scars on the landscape left by war. A century of agriculture and rebuilding has not restored the land to a lost featurelessness that cannot be recovered. There are huge craters. Shrapnel comes up in every handful of soil in some fields, even today. Unexploded bombs come up with the harvest every year and emerge as the earth is turned over every spring.

More than that, the people of France and Belgium in the Great War experienced civilian casualties and deprivation on an unimaginable scale. Entire towns full of people moved with the front – if they were not trapped and shelled – with no infrastructure left to support them. Driving through the towns today, reminders of the war are everywhere, and it is impossible to go more than a few miles without passing a cemetery.

The interwar period saw a massive recovery operation across the continent. Pilgrimages were organised to visit graves. Scattered burials were consolidated into cemeteries established anywhere there were already more than fifty graves. That means in craters, on farms, in ruins – anywhere they lay in numbers, they were not disturbed. Monuments were built in international projects. Farms and towns were rebuilt, often with few resources and with a determination and skill that borders on the superhuman. Brief discussions about leaving ruins as memorials were quashed by locals who wished to move on. But the cemeteries remained. There was no question that these foreign soldiers should be disturbed for anyone’s convenience. Instead, the land was donated, in perpetuity, to the participating nations to do with as they saw fit.

The Basilica and Lantern Tower

When the Western Front overtook it in 1915, there was already a chapel here, dedicated to Our Lady of Loreto (in French, Notre Dame de Lorette). The original was constructed in the mid-eighteenth century by a local man, painter Florent Guilbert, who experienced a miraculous cure on a pilgrimage to Loreto in Italy. Several successive chapels were built and destroyed here but it remained a place of pilgrimage. Now pilgrims commemorating the war come to Notre Dame de Lorette. 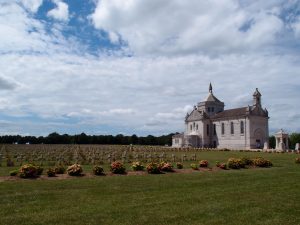 After the original, the church retained the title “chapel”. Despite this, you will often see references to the “Basilica” of Notre Dame de Lorette. That seems more in keeping with the grandeur of the structure. The present chapel was founded in 1921 and designed by Louis-Marie Cordonnier. Cordonnier was an influential Flemish architect who was responsible for several characteristic belfries in the region, and both the town hall and opera buildings in Lille. He was in his sixties in 1918 but continued to work well into the 1930s on the post-war reconstruction projects.

The Lantern Tower is 52 metres high and has a revolving light that is visible at night from the surrounding towns. An Honour Guard at the base of the tower is drawn from relatives of those buried here. 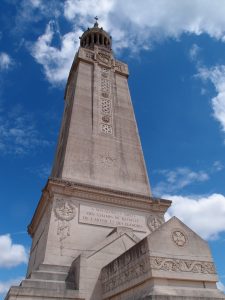 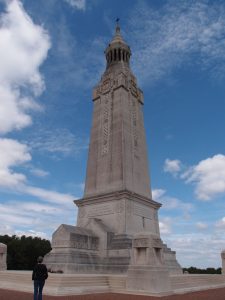 After the Second World War, France brought the ashes of many Holocaust victims here and interred them in the large ossuary below the Lantern Tower. The ossuary contains skeletal remains of many unidentified dead of the Great War. There are six thousand bodies interred here, and a further fourteen thousand in the seven smaller ossuaries around the site.

If you wish to attend a service of remembrance here, the chapel holds mass at 11 am each Sunday from Palm Sunday until Armistice Day (11 November). The flame of remembrance is lit in a ceremony beginning at 11.45 am after these services.

The chapel/basilica was closed and undergoing renovation when we visited (June 2018).

There are a few benches around the cemetery. The surfaces are gravel or grass, so not especially wheel-friendly, though the whole site is more or less level. The Lantern Tower is very close to the entrance and you can get up close without climbing the few steps to the plinth. The reason for climbing would have been primarily to gain access to climb the tower but, due to security concerns, this has been suspended so everyone must enjoy it from the ground!

There is ample parking close to Notre Dame de Lorette and L’Anneau de la mémoire. Park here to visit both places – they are barely ten metres apart across a narrow road. When you are outside the cemetery the paving is level and smooth without a kerb as you cross the road. 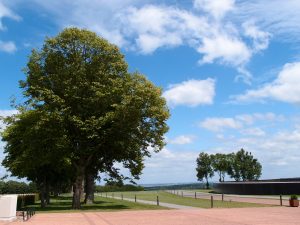 There were toilets when we visited but other visitors report that it can be hit-and-miss whether or not they are open. I suggest visiting after a lunchtime loo break or, as we did, visiting the museum at Lens or Vimy first.

Pin these images for later reference before we move on to L’Anneau de la mémoire! 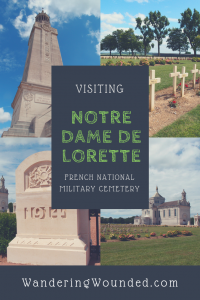 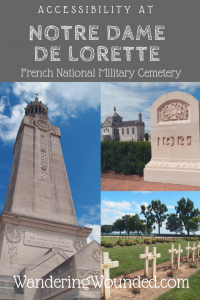 By placing Notre Dame de Lorette first with all the key information, I fear I am guilty of treating L’Anneau de la mémoire as a footnote to a visit to the main cemetery. In truth, it is a must-do and one of the most impactful places you can visit around Arras. 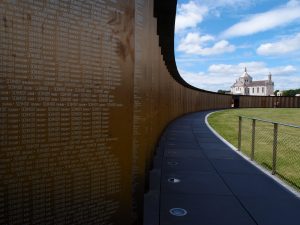 If there is any hope of truly grasping the scale of the devastation in Northern France during the Great War, it would be here. L’Anneau de la mémoire, the Ring of Remembrance, is a large elliptical structure with panels all the way around. These panels contain the names of 579, 606 fallen soldiers who died in this region between 1914 and 1918. Opened on Armistice Day 2014, it complements the 1920s and 30s cemeteries with its unique perspective. 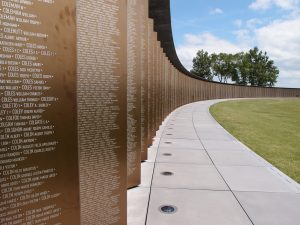 Rather than focusing on collective regimental achievements or national pride, it records the loss of life by listing names alone, in alphabetical order, without reference to national origin. Enemies are placed side by side in death. While this may have been an uncomfortable concept for those mourning loved ones in the years after the war, with the perspective of a century it brings home the truth that whoever wins a war, there are many who lose – including the lives that each of these people touched. At least forty different nationalities are represented here. Women, too. 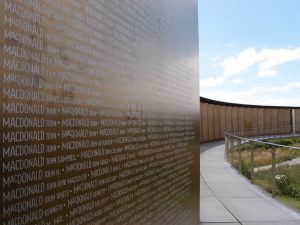 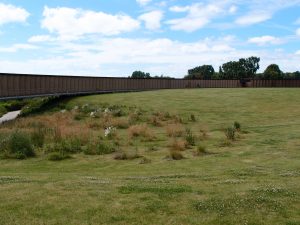 At the entrance to L’Anneau de la mémoire, you can move in either direction freely. At first the path around the memorial is level with the grass. Then you find that the walkway begins to project several metres over the surrounding landscape. It is suspended over the edge of a dip in the landscape where trenches and bomb damage have left their scars. As you move around, narrow gaps frame views of the plains and towns. Looking down from the far side, you can see the trench lines picked out in stone, now innocuously lining a flower bed. The contrast of silence and war, stillness against nature is striking. 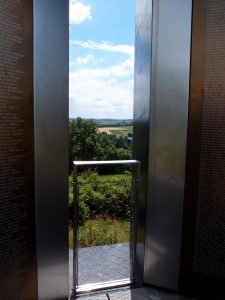 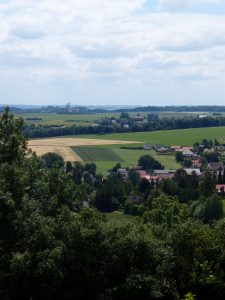 The number of names is overwhelming, and it is only when you realise that there are entire panels dedicated to one or two common names that anything close to a real appreciation sinks in. There are several panels of Smiths alone. Yet it is where the Gordons, Gorets, Goretzkis and Gorgels sit side by side – as the premiers of Britain, France and Germany did when the memorial was inaugurated – that the theme of reconciliation comes into its own. “The ring is synonymous with unity and eternity,” said the architect, Philippe Prost. 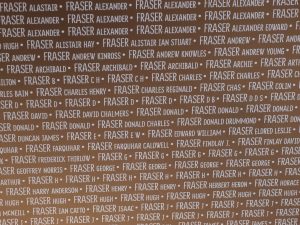 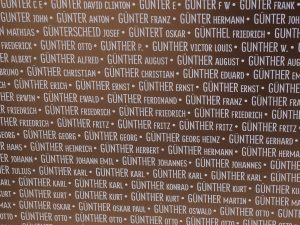 The Ring of Remembrance has good access. The entrance is down a shallow slope lined with panels that say “peace” in several languages – at chair height. There is no seating, unfortunately (it’s more than 300 metres all the way around and taking it all in takes time). However, the whole route is flat and very smooth, with lighting.

The panels are high contrast with white writing on the deep copper plates. Whatever height you are there will be plenty of names at eye level.

See above for parking.

This post on the Lochnagar Crater is part of a series on the Great War sites at the Western Front. Pin images...