This post on the Lochnagar Crater is part of a series on the Great War sites at the Western Front. 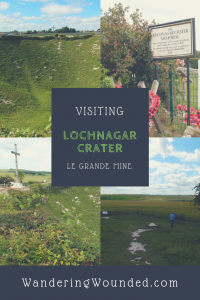 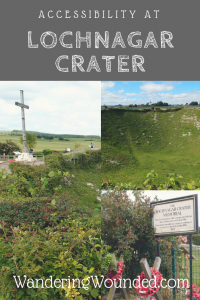 Lochnagar Crater exploded into being at 7.28 a.m. on the 1st of July 1916, the first day of the Battle of the Somme. We remember that day as the notorious launch of a battle of attrition that continued for five months with few gains. By 18th November, well over one million casualties lay dead across a fifteen-mile front. The allies advanced only six miles and the outcome was far from decisive.

Across from the British front line – known as Lochnagar Street – was the German trench line known as Swabian Heights. The sappers tunnelled across 300 metres until they were 30 metres under the German lines, risking interception by the enemy and death by explosion. Twenty-seven tons of ammonal lay under this site alone. Nineteen huge charges were detonated between 7.20 and 7.30 a.m. on the morning of the advance. The detonation of the Lochnagar and nearby Hawthorn Ridge mines together was the loudest man-made noise ever made. Contemporary accounts report that the sound was audible in central London. After the explosion of the Lochnagar Mine, Swabian Heights had disintegrated into a crater 100 metres wide and 30 metres deep. 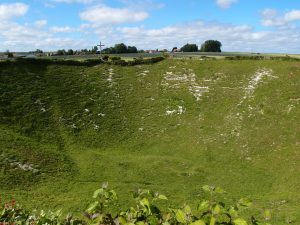 Lt Ernest Brooks was a British photographer who captured the Hawthorn Ridge detonation, on a similar scale to the Lochnagar mine.

At Boisselle the earth heaved and flashed, a tremendous and magnificent column rose up into the sky. There was an ear-splitting roar, drowning all the guns, flinging the machine sideways in the repercussing air. The earthly column rose, higher and higher to almost four thousand feet. There it hung, or seemed to hang, for a moment in the air, like a silhouette of some great cypress tree, then fell away in a widening cone of dust and debris. A moment later came the second mine. Again the roar, the upflung machine, the strange gaunt silhouette invading the sky. Then the dust cleared and we saw the two white eyes of the craters. The barrage had lifted to the second-line trenches, the infantry were over the top, the attack had begun.

The mines caused death and destruction on a previously unimagined scale. However, the planned obliteration of the German lines never materialised. Shelling before the advance had not knocked out the machine guns. Nor had the extent of German bunker fortification been taken into account. Allied commanders had not intended to fight a defensive war so did not consider cement bunkers to be a worthwhile use of resources or energy. The French command, in fact, saw it as positively defeatist. So when the heavy shelling began, they did not imagine that a majority of the German troops would take cover, then be fit and ready to man the machine guns in time to meet the Allied advance. The mine craters were a hazard and in some cases helped the machine gunners as British troops became trapped in the hole.

The Battle of the Somme

By the end of the first day, with gains of less than a mile, it was apparent that the offensive had brought heavy casualties and few benefits. Over 1500 French soldiers died that day, along with at least half of the 20, 000 German soldiers killed during the first week of the battle. The British losses were especially harsh, with 60, 000 men missing after the first few hours. The final British count was 57, 470 missing. These were the “lions led by donkeys” of popular lore.

The truth is, of course, rather more complicated than that. Attrition as a destructive tactic was successful in collapsing the German defences and halting their advance. The strategy was not a success overall, but it was not a lack of thought that led to the disaster of 1 July. Indeed, there was a great deal of discussion between the Allied commanders as to their preferred tactics.

In the end, no one was happy with the plan. The French commanders were forced to delay action against their will, while the British felt drawn into the French plan with which they were not entirely comfortable. Finally, a period of unseasonably horrid weather delayed the whole operation further and left the terrain in the state of waterlogged chaos in which it would remain for the duration of the war. Arguably, our whole image of the Great War comes from this battle, as the first catastrophic losses hit an army now composed largely of former civilian volunteers. 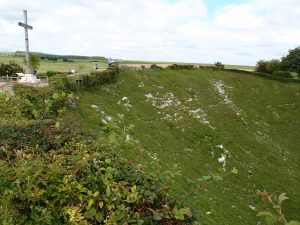 A place of pilgrimage

Amid the horror and carnage of the Somme, stories emerged of courage and solidarity. Medics risked – and lost – their lives in No Man’s Land trying to recover the injured. Despite criticism of the extraordinary 30kg loads advancing soldiers had to carry, the rations of dead soldiers sustained their wounded comrades. Some of the injured survived almost a week before rescue. Nine soldiers and medics were awarded the Victoria Cross for their actions on the 1st of July, six posthumously.

The Lochnagar Crater became a place of personal pilgrimage. Old soldiers visited to remember their friends and to reflect. With no oversight and the site at risk, Richard Dunning MBE purchased the crater in 1978 and it is still run as a private site. The Lochnagar Crater Foundation curates it with love and at no profit.

Boards around the site contain personal stories and reflections that show the human side of the war. They help to show the long shadows of the battle. Stories of reconciliation and peace counter the overwhelming loss. I am not alone in feeling this – the stories around the crater confirm it.

One moving board contained the reflections of Pte. Harry Fellows of the 12th Northumberland Fusiliers, who fought nearby. He wrote poetry to convey his memories of war, and his poem ‘Reflections on two visits to Mametz Wood – 1916 and 1984’ is reproduced in full at Lochnagar Crater. One affecting stanza:

That German boy, his bowels astrew
Fought for his Fatherland,
That he fought to the end is obvious
A stick bomb is still in his hand.
Did he hate us as much as we thought?
Was our enmity so just,
On his belt an insignia, ‘GOTT MIT UNS’,
Did not the same God favour us?

If you have a smartphone, there are QV codes that you can scan for more info. 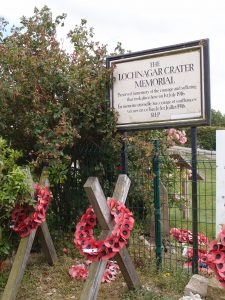 There’s good news and bad news at the Lochnagar Crater, depending on your access needs.

To access the whole site, you must navigate some steps. Unfortunately, there simply isn’t a way to get a view down into the crater, circumnavigate the site, and read every info board without this. If you can deal with up to five steps at a time, however, it may work very well for you.

Once you have tackled the planked slope up to the crater, however, it is partly accessible from the top. There is a section of around 100m along one side that gives you a great view down into the crater.

The surface of the walkway comprises smooth planks with small gaps between them. It is mostly even and very level except where there are steps. There are a few steps here and there all the way around, but the most I counted was five at once.

Off the main route around the edge, there is some grass with dirt paths to info boards. These are not entirely smooth but are firm and may be fine for many wheelchair users. Some sections are not accessible without first using the steps.

There are several benches around the crater. If you need to take your time, as I did, you’ll find places to rest at a good height. At most, there is a walk of around 150 metres between benches.

Overall, the Lochanagar Crater is well on its way to decent accessibility within the restrictions of the site. While I might hope for full universal access everywhere at all times, as an ambulant disabled person this was one of the easier visits on the Somme.

Lochnagar Crater lies close to the village of La Boiselle and is clearly signposted. You will find it just off the D929. Its local name, La Grande Mine, is on many of the signs too. There is parking sufficient for several cars, and with several people visiting when we were there we had no problem.

It is open 24hrs, though I suggest not going after dark as the effect might be spoiled if you fall in.

Despite the warning in the previous sentence, there are fences – and especially nice ones, made from rough tree trunks and substantial branches. You are not allowed to risk a descent, however.

There is a remembrance service at 7.28 a.m. on the morning of the 1st of July each year, as well as the customary Armistice Day commemorations.

You can read more on the great website of the Lochnagar Crater Foundation.

Moeuvres British Cemetery lies just off the D34A a few kilometres Southwest of Cambrai. It is a small...